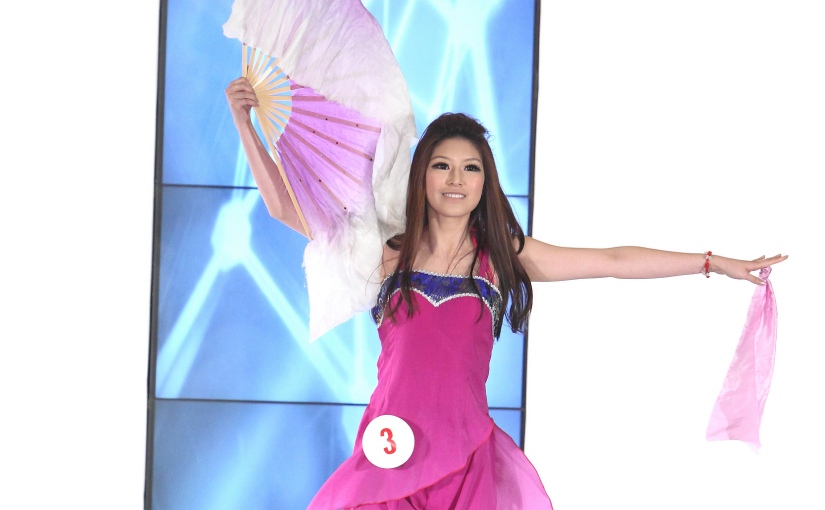 2 full rehearsals later on stage, we were ready to go to hair and makeup and await the clock to strike 7 that night for the show to commence. Behind the scene is not as glamorous as you imagine it to be. It’s chaotic and loud. Doing the hair and makeup for 24 girls took hours to complete, but thanks to our ever-so-diligent staff, everyone managed to look great in the end. This portion of the show is of course my favorite.

My inner Marie loved every moment of the transformation, and what a transformation it was – I could hardly recognize myself. I was told by other participants that I resembled a doll – not sure if that’s a compliment… My makeup artist managed to double the size of my eyes through fake lashes and eyelid tape. This is also after I had big eyes to begin with. I thought I looked great though – my confidence to win was high. I was ready!

Our uniform was a pink racer-back tank top with a white tennis skirt. That’s what we all walked out in as the show began. We were given numbers based on height, with the shortest being #1. At 5’4, I was #3 – no surprise there. We did a lap around the entire ballroom, looping between tables all the time smiling and waving. Upon returning to the stage, we all lined up according to “position 3” and in “stance”. These terms will be used throughout the next 4 months, so I decided to define some terms here.

Position 1 — In sequential order, line up from left to right starting with #1.

Position 2 — In sequential order, line up on 2 sides with even #’s on the left side and odd #’s on the right side; #1 and #2 are at the center of the line  and increases as the line fans out.

Position 3 — In sequential order, line up on 2 sides with even #’s on the left side and odd #’s on the right side; the last 2 numbers are at the center of the line and decreases as the line fans out.

For my group of 4, I must have had the most experience with catwalks though only once in a bikini before. Little did I know, that number is soon to be doubled and tripled in the coming months. I was selected to be sent to the safe zone first and there I sat for the next 4 rounds.

I was amazed at how slim I looked on stage. If I compare a picture of myself in bikini from just 4 months prior, I can tell there has been a huge change. At that point, I was being really careful with what I eat and working out every day. The result was a 1.5% decrease in body fat over the course of 2 months. It’s normal, but I wanted faster results, I just didn’t know how. If you’re unfamiliar with % body fat, here’s a previous article I had written on how to measure it and why it’s more important than BMI/weight. I know it may not look like a big difference, but that’s 1.5% looks like. Keep reading to see the result of 5% only 2 months later!

Based on a 30 second self-promo, 2 contestants in the safe zone is eliminated. I was the second to perform. I used the same dance I prepared for my interview. The top 14 contestants were selected by both the audience and the 5 judges that were present. Based on the most votes, 2 people were eliminated. Judges possessed 10 votes each while the audience possessed 1 each. In the end, I was safe with only 1 vote from a judge, which I think was caused by “lost in translation” to one of the judges. Normally, you vote on your favorite contestant, not the opposite. No matter, I still had one of the least votes. I knew I had nothing to be worried about!

Our entire show was then uploaded onto YouTube which you can watch it here. You’ll see me at the following times:

Here’s a picture I really like with everyone from semi-finals:

I also found some Chinese newspaper articles published about top 14. 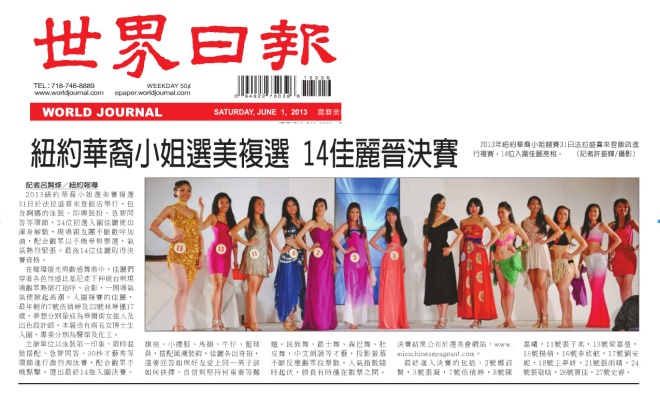 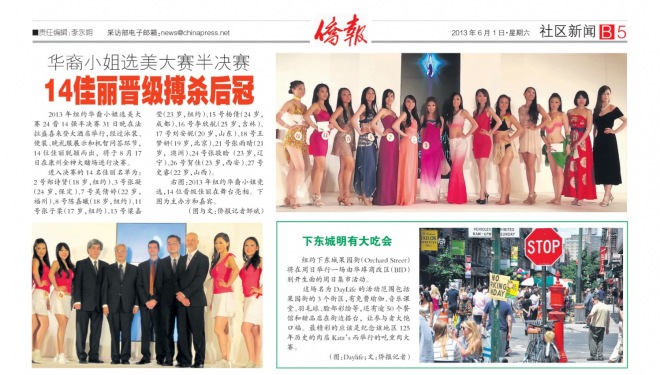 I love discovering and sharing knowledge on health, beauty and life. What are you doing to take care of your mind, spirit and body? Follow me on my blog to for some quick tips. View all posts by beautyinexcess